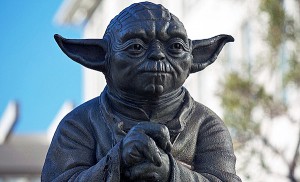 When Yoda encourages Luke Skywalker to persist in his attempt to lift his ship out of the swamp in “The Empire Strikes Back”, Luke shrugs his reluctant acquiescence: “All right, I’ll give it a try.”

Prompting Yoda to famously pronounce, “No! Try not! Do. Or do not. There is no try.”

Great advice for a hot-headed young hero until your direct mentorship, but totally counter-productive when we first encounter our prospect on the hero’s journey of search.

When someone’s searching for a solution to a problem, their prime directive is always to not make things worse.

Paradoxically, desperation for change actually increases resistance to buying, precisely because the force of desire will bump up even harder against the shoals of “worse.”

When we’re in fear, our reptile brains go into hyper-drive to keep us safe. And one of the main things we look for, in any new scary situation, is an escape route.

‘Try’ is Your Friend

Your goal as a marketer in high-stakes situations is to reduce the perceived risk of “worse.” To offer the best escape route to the fearful. And one of the best ways to do this is to be the anti-Yoda, to offer fully the commitment-free concept of “try.”

To try means not to commit. To test the water before leaping in. To take a series of totally reversible steps and have the capacity to monitor each of those steps for any sign of “worse.”

How can you invoke the welcoming, reassuring power of “try”?

Using the word “try” itself in your sales copy is a start. Compared to ads that demand instant action (“buy now”), a “try” ad will look like a path of lesser resistance.

Then reinforce the “try” with a reminder of the no-risk, tiny-step, reversible nature of their action. One phrase I love comes from the “Robert Collier Letter Book” (first published in 1931): “This card obligates us only – not you. Will you TRY it? Will you put your name on it and drop it in the mail?”

The reader is reassured that they are not obligated. There will be no recriminations if they just walk away. And the “it,” the first step they are asked to take, turns out to be laughingly low-effort: “put your name on it and drop it in the mail.”

Other words in the same vein include “consider,” “think about”.

When your prospect is facing a big problem, they typically feel a loss of control. After all, to be in control, by definition, means to be able to handle your stuff. A big problem pokes a hole of reality into this illusion of control.

When life feels out of control, we often sink into purely reactive mode. We feel like we have few if any real choices. We “must” do something now. But we don’t know what.

When you remind your prospects that they have options and room to play, you reinforce their sense of autonomy. And ultimately, it’s from our autonomy that we make all our decisions.

So paradoxically, telling prospects that they don’t have to commit makes it easier for them to commit.

In his excellent book “Instant Influence”, Michael Pantalon identifies six different kinds of “change talk,” which he defines as “any statement uttered by the person you’re talking to that suggests he is starting to think about change or perhaps even moving toward it.” I would argue that this definition applies perfectly to the act of search itself.

Search typically occurs at stages 2, 3, and 5. None of these is the magical commitment stage, the place in a business relationship where money changes hands.

The “try” stance is a powerful way to allow your prospects to progress through obligation to desire to action to intrinsic motivation. Through your gentleness, you encourage prospects to take actions in their own interest and at their own pace. So doing, you increase the likelihood of eventual commitment – to you.

‘Try’ on the Google SERP

And their competitors have upgraded to beautiful carts. Better graphics, easier interface, much stronger SEO. And Luke is losing sales and market share to these shiny, modern rivals, and has become desperate to reverse the slide.

Luke is worried about making a bad decision. He knows people who spent tens of thousands of dollars on new carts that never worked right, that never interfaced properly with shipping and inventory, and that killed their SEO rankings. He doesn’t have anyone he can trust, his funds are limited (precisely because of the problem that he needs to spend money to solve), and he doesn’t trust himself to know a good solution when he sees one.

Four of the six ads pictured understand to some degree the importance of try, as they offer literal “trials.” 3dcart.com does the best job of lowering the barrier to entry by describing the scope of “try”: “Set up in 5 minutes.”

Magento.com invites searchers to “view a demo,” while CartGenie.com and Americommerce.com refer to how “easy” the cart is to set up and/or use.   But none of these ads really addresses Luke’s deep worries.

What they’re all missing is the part where a trial can prove the merits of the product. I’d try language like this:

Or, for a deeper level of “try,” I wouldn’t sell the cart at all at this point. Instead, I’d offer them, risk-free, what they really want: information and wisdom.

“Free report: How to Avoid Making the Same Mistakes with Your New Cart. Free download, no obligation.”

At a certain point in the sales cycle, Yoda is correct. There is no longer any “try.” There is at least some commitment. If your prospect is still talking to herself in “maybe” language at the end of the process, they will not act.

But “try” is a great place to start.