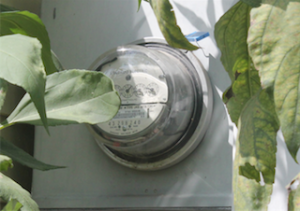 During the energy crisis of the 1970s, governments scrambled desperately to promote conservation as a method of combating rising demand and uncertain supplies.

In Holland, one suburb’s consumption patterns utterly baffled the officials. The houses were all identical, and all built at the same time. Yet some of the households used about one-third less electricity as the rest.

Same houses. Same cost of electricity. And, as it turned out, same average family size.

So what on earth was going on?

It turns out that the houses were not exactly identical. In most of the houses, the electrical meter was in the basement, neatly out of the way and generally ignored.

But in some of the houses, the electrical meter had been installed in the front hallway. And it turned out that those were the houses with one-third less consumption.

As people became aware of the need to conserve, they all tried to cut down: lowering thermostats, turning off unnecessary lights, that sort of thing.

But the families who passed the whirling electrical meter several times a day received constant feedback about their efforts. That in-their-face feedback turned out to have a huge impact on the success of their conservation efforts.

One of the most important qualities of any system is its feedback loops. A feedback loop consists of some response to an action that creates either more or less of the action.

The systems in the two types of houses were identical except for the placement of the energy consumption feedback mechanism. And that tiny detail accounted for a huge discrepancy in outcome.

Your business is also a system, and also operates on feedback loops. Some of the most common include the basic financial reports: cash flow statements, income statements, and balance sheets.

As useful as feedback loops are for responsible financial management, they are incomplete as navigational instruments for business because they deal with outputs, not throughputs. An output is something that the system produces that leaves the system (e.g., sales, profits, and products).

Can You Smell a RAT?

High quality feedback has three essential qualities, summarized in the acronym RAT: it’s relevant to the goal, it’s actionable, and it’s timely. Let’s look at each of these qualities in turn.

RAT on Your PPC

If you run PPC campaigns, you’re already inundated with feedback. Just open your AdWords dashboard to get overwhelmed by tables of statistics.

If you aren’t drowning yet, run some reports. Or head over to the Dimensions tab to slice your data three ways to Sunday.

Not done yet? Mosey on over to Analytics for even more data.

PPC is overwhelming when you don’t apply the RAT filter to the feedback with a vengeance. In fact, all feedback that isn’t RAT is just noise, and serves mostly to distract you from what’s truly important.

The specific data you pay attention to will vary from business to business, and even from month to month within the same business. I can’t tell you that click-through rate (CTR) or cost per conversion or profit per click is the most important number to watch, even though these metrics typically relate strongly to overall performance.

If you’re looking at CTR, the question is, which CTR is most relevant? Overall? CTR for a specific campaign? Or for a particular ad? Or even for one uber-important keyword?

It’s possible and not that uncommon that the majority of your profits comes from a single keyword. It’s also common that advertisers don’t realize this dependence from their analysis of the PPC dashboard, and therefore chase feedback loops that lack impact.

You also want the PPC metrics you pay most attention to be actionable. There’s often not much you can do about ad impressions. Instead, you might focus on where and when those impressions occur, so you can tailor your ads to those places and times.

For example, if a large amount of interest in your ads for greenhouse kits comes from Maine, Minnesota, and Massachusetts in August, you might create specific ads about extending a short growing season and getting a delicious tomato crop before the fall freeze.

If the greenhouse kit searchers are from North Carolina and Georgia in December, on the other hand, your ads might talk about the ability to grow tropical fruits like avocados and bananas in their backyard all year round.

Timely PPC feedback involves two aspects of time: the age of the data, as well as an appropriately long time frame. Obviously, the more recent the data, the more useful. But you can overdo recency at the expense of a reasonable time frame.

For example, if you declared an ad split test winner after a single day of results, you would be risking a lot of random noise that might overwhelm the real trend. That would be like declaring a coin “rigged” because you flipped it twice and got tails both times.

Typically, you want to run your split tests for a least a week so you capture data from all days and times of the week.

Moving Your RAT PPC Feedback to the Front Hallway

The Dutch homeowners all had access to the same data. It’s just that most of the them didn’t see it on a regular basis, and so acted much less effectively in conserving energy.

How can you put your key PPC indicators in the front hallway?

Once you put the spinning wheels of PPC data in your face, you can’t help but make better decisions and get better results.

So get out there and smell a RAT!