How to Win in the Google Stock Market

The Google search engine has a hidden side. Because it sells ad space based on a keyword auction, it’s actually a stock market for words.

If you bid on “donate your car Sacramento” or “DUI Attorney Houston”, you’ll find that the market for those words is very robust. Advertisers are willing to pay a lot of money for those words because they expect their return to be commensurately high.

On the other hand, keyword phrases like “depressed Russian novelists” or “refillable travel toothpaste” cost – and may be worth – practically nothing.

Every word and phrase now has a value in the marketplace, so bidding on keywords is like buying stocks or commodities or futures.

In a real stock or commodities market, the value of the thing you buy is independent of your efforts and your work. It’s determined by the market’s perception of how much that stock is worth.

If you and I and Warren Buffett each buy 10 shares of Apple, it doesn’t matter that you’re a good upstanding citizen, I’m a scoundrel, and Warren Buffett is a genius. At the end of the day, our shares are going to be worth the same amount.

The value of a keyword, on the other hand, depends on what kind of value you can extract from it.

If you can split test your way to doubling your click-through rate (CTR), all of a sudden that keyword could be worth almost twice as much as it was before. But just to you. Thanks to the quality score algorithm, you now pay less per click than your competitors with less appealing ads.

If you split test landing pages and double your conversion rate, the keyword has become twice as valuable again. But you’re still bidding in the same auction as everyone else.

Optimizing your AdWords-driven sales funnel is like buying 10 shares of Apple and having the ability to perform a personal stock split every time you find a new winner.

Increasing the Value of Your Keyword Portfolio

Generally, the place to begin is with your ads, seeking to convert more qualified impressions into clicks.

For example, if you provide fresh healthy vegan meals anywhere in the U.S., one of your keywords would likely be the exact match term [vegan meals].

Here’s what Google shows me for that search term:

The market value for [vegan meals] in the US is $1.52, according to the AdWords Keyword Tool. Let’s see how to increase its value for your business.

Let’s say this is your control ad:

You might be tempted to boost your CTR by writing a more attractive and attention-getting ad: “Fresh Vegan Awesomeness” or something like that.

Simply increasing your CTR does come with two benefits. First, your quality score would increase, thus potentially lowering your average cost per click. And second, you’d get more traffic to your landing page, which means faster conversion rate testing and improvement.

But you don’t want to increase CTR by attracting non-buyers to your site; you aren’t looking for “clicks at any cost.” To the contrary, you only want clicks from searchers likely to resonate with your value proposition.

Most of the people searching for vegan meals are looking for recipes and ideas, not prepared food. So you aren’t trying to beat your control ad by fooling those people into clicking. Rather, you’re looking to actively discourage home cooks from clicking, and instead appeal solely to people who want to buy a ready-made meal.

Only the dots within the small green center circle represent folks who want to purchase ready-to-eat vegan meals. And those are the only searchers you want to attract with your ad. 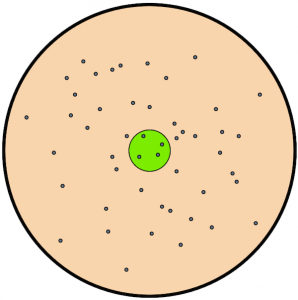 The headline immediately disqualifies anyone who wants help with their cooking, and speaks directly and powerfully to anyone who doesn’t, in fact, think they have time to prepare their own vegan fare.

Additionally, the strongly worded question may “convert” a few people who are half-heartedly dabbling in recipe-land (say, the parent or spouse of a vegan who has no idea how to support their family member’s eating preference) but would jump at a more convenient option.

Assuming this new ad performs well, repelling unqualified leads and attracting qualified ones, you’ve just increased the value of that keyword in your portfolio. The effect may be modest, but constant testing produces a powerful compounding effect.

Through slow and steady improvement, you can achieve market domination in one, and then an entire family, of keywords.

Warren Buffet would be proud.