Where to Find the New Google AdWords Competitive Advantage 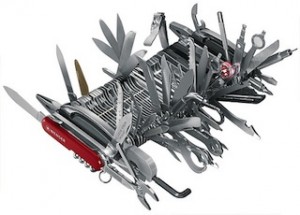 AdWords doesn’t have to be hard, complex, or time consuming.

You can still set up campaigns and ad groups without a lot of knowledge or skill. Just follow the prompts, choose a couple of obvious keywords, and accept all the default settings.

But don’t expect to make money. Because your savvier competition will have such an advantage by rejecting the obvious and the default, you’ll start advertising at a huge disadvantage.

Google is trying to change this. And if you want to stay successful at PPC over the next few years, it’s critical that you understand their thinking and motivation.

When I was a PPC youngster, we had to walk to school through 8 feet of snow, uphill both ways.

Actually, we had to use Overture, which felt about the same. We spent a lot of time “sniping,” an addictive but ultimately pointless exercise called “stick your competitors with really high click prices by bidding just a penny less.” If you’re into eBay, you may be familiar with this tactic.

And we had to wait 5-7 days for the mystery Overture team to tell us that 90 percent of our keywords were disapproved for the most inscrutable reasons.

Then, of course, came Google with its game-changing algorithmic tweak: the triple-win formula whereby ad position was determined by bid multiplied by click through rate. Suddenly the best ads were defined by searchers (win #1) selecting the messages of their favorite advertisers (win #2) to produce maximum clicky profits for Google (win #3).

As a result, he stopped messing around with bid sniping, and instead turned our attention to writing compelling ads.

In other words, we were now being rewarded for adding value to the marketplace. PPC competition began to achieve what competition is supposed to achieve: improvement, breakthrough, and differentiation.

The history of AdWords over the past decade has been one of increasing complexity and control. When I started, it was possible to be an “AdWords expert” in addition to your day job. Now, “AdWords expert” is too broad for any one person.

You might be a Display Network expert, or a PLA expert, or a Remarketing Expert, or a Google Local Buzz Merchant Center Places Plus Expert (or whatever they’re calling that thing today), but there are simply too many moving parts to be more than passing familiar with the whole machine.

And that’s a problem.

It’s a problem because the complexity that is AdWords has had a familiar side effect: advertisers are forced to spend huge resources mastering AdWords at the expense of mastering their markets.

We saw this clearly in 2004, for example, when I started selling an Excel spreadsheet that added quotes and brackets to long lists of keywords so that advertisers could take advantage of phrase and exact match searches.

I’m not complaining, mind you – that little tool paid my mortgage for many years. Most advertisers were not savvy enough to realize that phrase and exact match even existed; otherwise I might own a small island in the Bahamas by now.

And there were literally hundreds of other little tricks and advantages to be had by studying, tweaking, and gaming AdWords. I met a guy in 2007 who bragged of having gotten tens of thousands of dollars in free clicks by doing something weird with his campaigns around midnight on Tuesdays – to this day I have no real concept of what he was talking about. But opportunities like this were common for many years.

The Pendulum Swing to Simplification

All this gaming of a complex system is problematic in two ways.

First, it shifts resources away from making better stuff and connecting more deeply with the market and toward lubricating the machine through which the connection occurs. As the gospel song goes, you gotta serve someone. Will it be AdWords, or your prospects?

The second problem hits Google’s bottom line more directly: AdWords is just too darn complicated for most businesses to use, let alone master. And given that AdWords is an auction model, any limit on the number of bidders reduces Google’s profits.

Google has tried for many years to come up with simple AdWords alternatives. Nothing’s succeeded, from Starter Campaigns to AdWords Express. Either they were still too complicated, or lacked the power to compete with the main PPC engine.

Now, however, Google is trying to invent the next iteration of search. One that evens the playing field in terms of how much you need to know about AdWords.

One example of this has been the death of long tail keywords. Instead of rewarding me for coming up with 1,500 ways of saying “red tricycle” (including misspellings), Google prefers the highest CTR broad match ad to the most accurate guess about what a searcher really typed.

Then, in a much protested move, Google silently removed advertisers’ ability to conduct statistically valid split tests (they later relented) in favor of a more “egalitarian” system (in which split testing brilliance was no longer rewarded).

The latest encroachment on advertiser’s freedom to outsmart each other is the dreaded “Enhanced Campaign,” which apparently constricts our ability to target different networks and devices completely independent of each other.

Google’s drive to level the playing field will not abate as long until the complexity of its system is no longer a barrier to entry to even the most modest business. And the ninjas currently at the top of the AdWords mountain will find their skills less and less relevant over time.

Which begs the question: when Google levels the playing field by removing the structural advantages that have favored AdWords nerds like me (and probably you, if you read Search Engine Watch obsessively), where can we go to find competitive advantage?

The answer becomes obvious when we look back at the history of new advertising media. Once the Wild West is tamed and everyone plays by the same playbook and rule book, the laws of business, community and life reassert themselves.

You can gain competitive advantage in AdWords by knowing and serving your prospects better than your competition. By caring more. By innovating more. By listening more. By speaking more authentically. By gaining more confidence and assuming more risk.

When Google ceases to be a Wonka-esque mystery machine and instead matures into a transparent pipe through which messages travel from merchant to market, what’s at the ends of the pipe becomes far more important than the pipe itself.