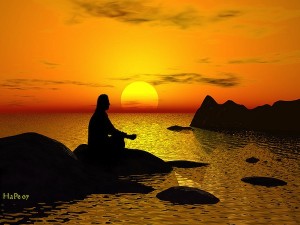 Every couple of months I get the urge to meditate. Like, to free myself once and for all from the illusion of separation and fully realize my oneness with all creation.

Or maybe just to feel virtuous and spiritual.

Or to help me avoid distractions so I can focus on important tasks, like writing this article – ooh, a squirrel!

The reasons vary, but one thing has remained constant for many years: I have never maintained a meditation habit. I’ve started them plenty of times, whenever my motivation reaches a critical mass.

Out come the cushion, timer, candle, and lighter. I wake up 30 minutes early and stumble down to where I’ve set up for sitting.

I power through for a few days, willing myself not to crack open an eye to check the timer when I’m sure I’ve been sitting for 45 minutes and the timer’s broken (it never is, and I’ve usually been sitting for less than 7 minutes when I first get the urge).

And after not achieving a cosmic state of realization in all that time, I eventually let go of the practice and sleep in.

For years I assumed I was just weak. Weak-willed. Weak-backed. Weak-intentioned. But then I stumbled upon the behavioral theories of Stanford researcher B.J. Fogg, whose work gives me a much more empowering and practical diagnosis.

I’ve been squandering the peak of the motivation wave on willpower, rather than structuring my future or building my skills.

To explain what this means, let’s move from meditation to search marketing.

We engage in a behavior when we’re sufficiently motivated and capable, and when something triggers us to do it, according to Fogg’s behavioral model. Of the three elements (motivation, ability, and trigger), motivation is the most fragile and unstable.

The act of searching Google is indicative of a motivational peak in the searcher. You may have had a vague interest in learning how to play classical guitar for years, but you haven’t searched for a guitar, a teacher, an instructional YouTube video, or a book yet, have you?

Then one day you find yourself on Google, looking for local teachers. What happened?

For some reason, you experienced a surge of motivation for that behavior (playing the guitar). There was a search trigger (perhaps a piece you heard on the radio, a guitarist in the subway, or a dream in which you were receiving the Nobel Prize for Music) that either occurred at precisely the time that your motivation was peaking, or that itself contributed to the peak.

Because the motivational peak is such an ephemeral occurrence (when you think about it, most of us don’t spend a ton of time super jazzed about our new behaviors and habits that we haven’t developed yet), we must use it wisely.

And as marketers, when prospects come to us via search marketing, thereby signaling their temporary motivational spike, we must shepherd them wisely as well.

One of Fogg’s key insights is that there can be a tradeoff between motivation and ability. The more motivation, the harder we’re willing to work. When I’m super excited about the benefits of meditation (or running, or yoga, or whatever else), I’ll put in long hours and withstand high degrees of discomfort.

When I’m rather unmotivated, I do only the easy things. A minute of deep breathing every hour. A short walk around the block. Five minutes of sun salutation.

As marketers, we want to take full advantage of our prospects’ temporary motivation highs, to get them to take actions that they wouldn’t ordinarily take.

That’s pretty obvious, even if you haven’t studied motivational theory. When someone’s hot for what you got, show them the buy button and ask for the money.

But for many businesses (and all lead-generation business models), the sale is some time in the future. So how to harness high motivation now to make that sale more likely or to make it come sooner?

The biggest online mistake I see is assuming that the prospect’s motivation is insufficient. Too many web pages try to amp up the motivation, piling benefit upon benefit, fear upon fear, judgment upon judgment, until the prospect simply can’t live with such a huge gap between current reality and desired future.

This tendency is a legacy from the direct mail era, when marketers mailed millions of letters to people who didn’t ask for them, didn’t want them, and probably wouldn’t read them.

In that scenario, the third stage of the AIDA process, desire, was absolutely necessary to make sales.

In the world of active search, it’s much more efficient to utilize whatever level of motivation already exists in the prospect and get them to take an immediate action commensurate with that motivation.

The Right Ways to Use High Motivation

Fogg suggests that motivational peaks are best exploited by getting the person (whether yourself or someone else) to take the most difficult action they can take at that moment that either structures the future or increases their ability.

By structuring the future, Fogg means creating an environment in which it’s easier to perform the desired behavior or in which there are clearer, more intense, and more frequent triggers for the behavior.

If you want your prospect to hire your accounting firm, you can make it easier by sharing a list of existing clients, along with their testimonials. Risk reduction makes new behaviors easier to perform.

The other that’s hard for most of us is self-improvement. Most of us tend not to try to get better at things unless we’re in the grip of a motivational wave. Because getting better means attempting actions outside of our comfort and competence zones.

But a motivated prospect is often willing, for a brief, precious time, to stray outside their comfort zone. The question we should be asking as marketers is, “What new capability or knowledge would make this person a more qualified prospect?”

If I’m selling neurofeedback software to improve athletic performance, for example, I may need my prospect to understand some pretty complex science about the relationship between heart rate variability, physical stress, and training cycles.

In that case, I would want the prospect to watch a video or read a report that increased their knowledge in that area.

Marketers must take advantage of their prospect’s motivational peaks to get the opt-in. Since those peaks are so short-lived and unstable, it’s crucial that we be able to continue the conversation with our prospects and reconnect them to the surge of desire that allowed our paths to cross in the first place.

Back to the Cushion

Now that I understand how to harness a motivational peak, I’ll market meditation quite differently to myself the next time I’m high on chasing nirvana.

Rather than jump into a hard activity that I can only sustain when I’m highly motivated, I’ll use the spike in enthusiasm to develop the habit of daily meditation. Like, 30 seconds every morning. Without fail, and without excuse.

It doesn’t matter how unmotivated I am, I can sit still and breathe consciously for 30 seconds.

In that way, I’m structuring my future in a completely new way. And when it’s time for 30 seconds to turn into a minute, or two, or five, or 20, or 3 hours, it will happen naturally and easily.

Remember that our prospects already want the benefits of what we’re selling. All we need to do is show them the easy way to get there.