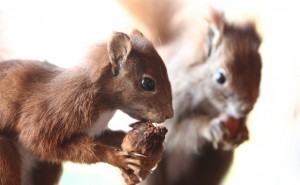 Despite having a comprehensive website, chock-filled with valuable information, one law firm found itself suffering from an opt-in rate for a free case evaluation of just 1.1 percent. The figure was so low that Google AdWords was an ROI-negative advertising medium.

One of my colleague has been tasked with improving this client’s website, which offered services for people who had suffered a particular misfortune. During a recent meeting, he shared some of the landing page changes he was testing: structure, copy, colors, images, elements, etc.

I asked him about the thinking behind his choices.

“We’re trying to help the hungry and sick squirrels in the park,” he explained.

Helping the Hungry and Sick Squirrels

After interviewing the client, analyzing data from form submissions, analytics, email signups, and AdWords, it was determined that prospects were arriving at the site with a “fragile psyche.”

Their dominant feelings were fear and uncertainty, two emotions that generally lead to paralysis, not action. In addition, the prospects had already dealt with lawyers (not the “good” kind), and were highly skeptical, if not downright hostile, to lawyers in general.

As a result, many of them took no action, or didn’t take action until it was too late. And how could they determine which lawyer to trust? Why choose this law firm instead of law firm B?

So, returning to our squirrel metaphor, the prospects needed to first trust the client enough to take a “nut” from him. Moreover, once the “food” is accepted, you still need to approach the prospect slowly and cautiously enough to get their permission to administer the medicine they need to heal themselves.

All this to help an “animal” whose deepest instincts tell it to run away and protect itself.

Now, if you sell to a prospect pool that feels empowered, in control, and assertive, none of this may matter to you. If, however, you sell in a market where safety must precede enticement, this “hungry sick squirrel” theory of marketing is relevant to your website.

So let’s look at two specific strategies that soothed the prospect and built trust prior to sharing expertise and offers.

Our client is a knowledgeable lawyer and prolific writer, as well as a swell person. Yet her information-packed website was overwhelming, rather than soothing, her prospects. The articles clearly showcased her expertise, but at the expense of the human touch. They looked more like legal documents (of which her prospects were already wary) than helpful, empathetic guides to action.

Website engagement data determined the hottest topics – those questions that were most pressing to visitors – and answers were rewritten in a caring, conversational tone. Rather than simply sharing information or conveying expertise, these articles signaled the presence of a caring person.

We worked with the client to achieve consistency of tone across the entire experience, including emails, voicemail messaging, and live inbound marketing.

Nothing says “humans work here” than, well, actual video footage of the humans who work here. Turns out the client had an active and prolific YouTube channel. We “borrowed” one of the videos of the lawyer sharing helpful, empathetic, and highly relevant information and placed it front and center.

We also deployed short videos on the pages answering the common pressing questions asked by visitors.

Overall, the effect of the videos and articles was to populate the site with overwhelming evidence of a helpful human – not stock images, but actual footage of the person who would be speaking to them on the phone, replying to emails, and representing them in court.

Once the prospects lost their immediate fear, the next task was to give them bite-sized pieces of content. Rather than overwhelm visitors with long and authoritative treatises, the articles were kept short and sweet.

The videos lent themselves to this strategy, as most were between one and three minutes long.

So now instead of overwhelming prospects with “everything you ever wanted to know but were afraid to ask,” the website was providing valuable and easily consumed nuggets.

Following each nugget – video or short article – was the opt-in form for a free “survival kit.” Only after the nuggets had been experienced were visitors willing to request and consume a bigger dose of content.

Making these changes and supporting them with visual elements such as a light blue background and a header image of Corinthian (or are they Ionic?) pillars to signify gravity and legitimacy immediately boosted the response rate to 1.9 percent.

And that’s before any systematic testing of the elements: fonts, colors, placement, wording, etc. – all the things that reliably produce up to a 2x improvement just by hoisting different versions up the flagpole and counting the salutes.

Even more significant than the 72 percent improvement in opt-in has been the increased quality of those leads – over 50 percent of them are converting into clients.

We’ll continue tweaking, listening to feedback, and testing new ways of communicating the humanity that accompanies the expertise. But we’ll always be working with the goal of soothing the hungry sick squirrel before we offer to heal it.